Stockholm Syndrome and How to Deal With It 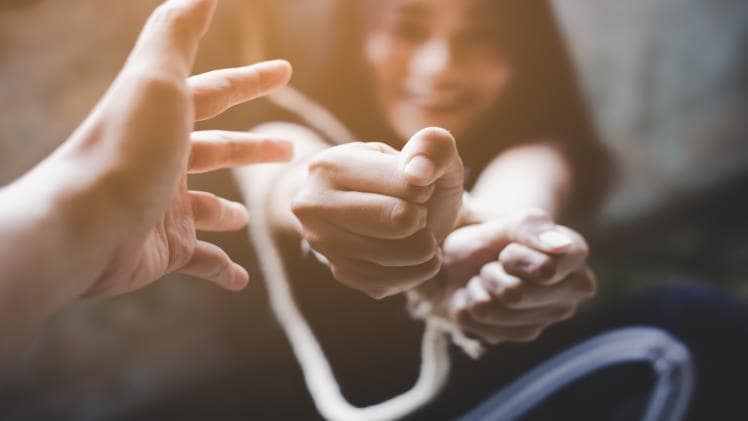 Stockholm syndrome is one of the destructive factors of the human psyche and has different manifestations. Let’s look at what it is, how it manifests itself, where the name came from, and how to get rid of it.

Stockholm syndrome in psychology means the love of the victim for the abuser. The history of the term dates back to the 1970s. It has to do with a terrible crime in Stockholm. On August 23, 1973, Jan-Erik Olsson, a newly released repeat offender, took three women and a man hostage while in a bank. He demanded the release of his former cellmate, a large sum of money, weapons, and a speeding car.

The negotiations lasted a long time, and on the 5th day, the police launched a gas attack. In the end, the hostages were released and the perpetrator was detained. However, all the victims, as it turned out, weren’t afraid of the aggressor at all, but of the police. They believed that the perpetrator had done them no harm, while the actions of the police could have killed them.

Over several decades, the concept has come to include a host of different situations between the aggressor and his victim. At the same time, sympathy can be not only one-sided, but also two-sided. This phenomenon is a mental reaction to stress, an adaptation to an extreme situation, violence, a way of preserving one’s own life. It’s a connection that occurs at an unconscious level.

Stockholm syndrome is a mental disorder. It’s a pathological condition in which instead of fear or hatred there is sympathy for the tormentor. The victim finds excuses for his actions and defends and sometimes joins in the criminal acts. He may hire a lawyer for someone who has caused him significant harm, regardless of the horrors he has gone through. A large number of women are susceptible to it. In this case, the syndrome can be either traditional or “corporate”. The second case implies a dictatorial relationship at work. Certain conditions are necessary for the phenomenon to occur. In this case, the victim not only falls in love with the torturer but also feels sympathy for him, finds other points of contact, as well as common interests.

Some time spent in isolation or alone with the aggressor promotes this. There appears an imaginary understanding and justification of the evil deeds. There are many options for developing relationships (for example, rape, hostage-taking, kidnapping). At the same time, the victims often make statements about the rightness and justice of the actions of the abusers. Synonyms for the phenomenon are survival or common sense syndrome. It’s studied to this day by many scientists and criminologists. Its origins are hidden in the nature of the relationship that develops between the abuser and the victim.

Stockholm syndrome occurs when several conditions combine to cause the hostage’s survival mechanism to kick in:

But such a situation harbors many serious problems. Not only does a person put himself in greater danger, but he also begins to act against his interests and desires. He shouldn’t defend the offender, cover him with himself, justify him, or hinder the work of the police.

The domestic Stockholm syndrome is somewhat different from the usual one. As a rule, it manifests itself in women’s relationships with male tyrants and oppressive personalities. There is also a variant of the development of parent-child relationships. The reasons for the formation are different. However, what is invariable is the emotional and psychological dependence that has to be faced in each case.

Often the main reason for women suffering from domestic tyranny is low self-esteem. A person considers himself a magnet that attracts all the troubles of life. His world is painted in negative shades. The person doesn’t believe that he or she deserves anything more. Believes that he is obliged to tolerate and be humble. Excessive self-criticism plays no small part in this.

Besides, in case of gender violence a woman feels that in case of any contradiction she will only increase her partner’s anger. She believes that if she behaves obediently, these actions will be directed at someone else. The tyrant, on the other hand, not only humiliates and bullies the victim, but may also repent. This pattern, however, will repeat itself ad infinitum. Unfortunately, in most cases it ends badly. If the woman doesn’t end the relationship, she ends up in the hospital or in the cemetery.

The man abuses her not only physically but also morally. He constantly reproaches her for being a nobody without him, for being incapable of anything. Years of indoctrination are doing their work, so it is difficult for her to break the abnormal relationship. Another reason is financial dependence on her partner. Emotional weakness may also be a factor leading to an abusive relationship.

It’s common for an abuser to kidnap a woman or child, the abductee may hide her real name and location when she has the opportunity to call. One of the reasons for a destructive relationship is the great difference in the abilities and strengths of both parties. Psychological dependency can come from the woman’s lack of employment, humiliation, or threats of dismissal by her boss. The demands may vary, but almost always they lead to an awareness of one’s own incompetence, indecision. A person is burdened with work, forced to do things for which he or she is not paid.

In a “parent-child” situation, the key cause is a traumatic situation accompanied by violence. For example, this is characteristic of those who were forced to grow up in an unfavorable atmosphere. The main factors are a difficult childhood, violence against the child, humiliation, physical bullying. With systematic repetition, the child becomes convinced that such behavior is the norm. As a result he grows up to be a weak-willed person, ready to do anything for the sake of survival. Such people know no love or independence of their own.

Stockholm syndrome also manifests itself in sects. Mostly it affects people who have been brainwashed by suggesting their helplessness and complete obedience to the elders. Besides, in such a relationship, a person is required to constantly obey any orders.

Over time, the person’s emotions are erased, she becomes weak, weak-willed, with low self-esteem, ready to do anything for the sake of approval.

The symptoms of abnormal attachment to the tyrant or invader may manifest themselves in different ways. While the victims themselves sometimes don’t see that their consciousness has changed, those around them may give an adequate assessment of their behavior.

In a stressful situation, the person ceases to exist as a separate person. He completely identifies himself with his tormentor. This defense mechanism helps the unbearable to endure. The victim is afraid to die, so he/she is grateful to the villain for the fact that he/she is still alive.

How to Deal With It

Stockholm syndrome is dangerous for everyone. It changes human consciousness, life priorities, and distorts the worldview. Dealing with it isn’t as easy as betting via Bet22. It’s a long and painstaking work to come out of it on your own. It’s impossible to change the person’s mind that this condition is dangerous and requires intervention.

The first step towards getting rid of the problem is to consult a professional psychotherapist. The specialist will assess the condition of the person, will help to understand the impropriety of the reaction to the situation, and make psychoanalysis. If resorting to a specialist is impossible, you can try to talk to the person yourself, gently suggest that he read literature on the topic.

Before it’s too late, it’s necessary to urgently undergo therapy, which is provided for those who have been subjected to violence. This can be cognitive psychotherapy, adaptive ways of work with stress, feelings of guilt and normalization of the experience.

Previous articleWhy Should You Sleep With A  Down Pillow
Next articleSports betting guide for advanced players to get all sports betting tips.