Shadab Khan: A Next Big Star Of Pakistan 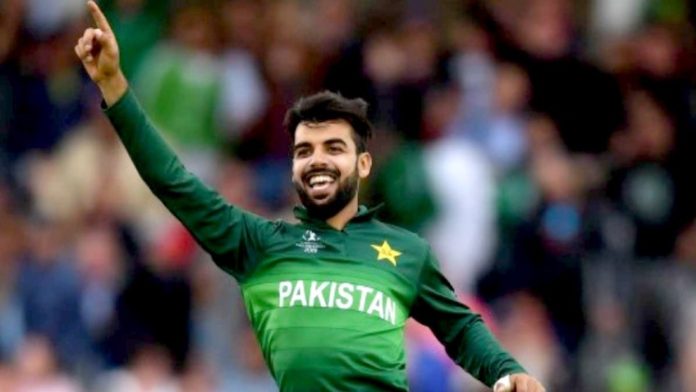 Shadab Khan is a cricketer for Pakistan who competes in both one-day and test matches. On October 4, 1998, in the city of Mianwali, Punjab, Pakistan, he entered the world. Shadab is a versatile player, but his best skill is bowling leg spin with his right arm. This post is a headlines cricket for Shadab’s career.

When bowling, Shadab prefers to utilise his wit to fool the batter rather than bowling at full speed. His wide-angle deliveries may fly in the air or stay on the ground, making him a dangerous bowler.

At the age of 12, Shadab relocated to Rawalpindi, where he quickly established himself as a key member of the school’s cricket squad. His desire to learn from Pakistan’s cricketing legends like Mushtaq Ahmed and Abdul Qadir led him to enrol at the National Cricket Academy in Lahore

His development was on track, and he was expected to be a first-round pick for the 2016 Under-19 World Cup.

Most of Shadab Khan’s games have been played using this format. On March 26, 2017, he made his Twenty20 International debut against the West Indies. In his first two matches, he bowled quite well, capturing three wickets for seven runs and four wickets for fourteen runs. Shadab took three more wickets in the following two games of his maiden series against the West Indies

There was a series between Shadab and South Africa in 2019. The South African hitters had a good time with Shadab’s bowling, as he was hammered for many runs and took just one wicket. In the most recent encounter against South Africa, he scored 22 runs in only eight deliveries and also took two wickets while giving up 34 runs. In 2020, he would face off against England in his next major series. Shadab scored 15 runs with the bat and grabbed 5 wickets at an economy rate of 9.58 in the three games played at Old Trafford. The next three-match T20I series he played in was in December of 2020, against New Zealand. Despite not picking up any wickets in the series, Shadab managed to hit a career-high 42 runs in the opening game. He faced up against England and the West Indies in a pair of 2021 series.

Shadab Khan has been selected to play for Pakistan in the next ICC Twenty20 World Cup. Shadab had an economy rate of less than six in the first game versus India and also got rid of Rishabh Pant. Shadab bowled particularly well against the Australians in the semi-finals, sending four hitters back to the pavilion after modest performances in the previous encounters. Shadab Khan was included in Pakistan’s Asia Cup team the same year (2022). Shadab bowled four overs for only 18 runs against Hong Kong, one of his greatest performances, and also made 54 runs at the batting crease over the course of three games.

On April 7th, 2017, Shadab Khan debuted in one-day international play against the West Indies. The first game he played in, he ended up with two wickets and fifty-two runs against him. After a rough start to the series, the next two games went swimmingly for him, as he collected three wickets. For the upcoming 2017 ICC Champions Trophy, Shadab will be representing Pakistan. Shadab scored 14 runs and grabbed one wicket in a high-pressure first encounter against India. Shadab increased his total wickets taken in the competition by three after participating in the last three games. Following that, he participated in a five-match series against Sri Lanka, during which he took 10 wickets. Shadab, who had just one at-bat before to the Sri Lanka series, showed his mettle by making his first fifty in that game.

Then, in June of 2019, Shadab was a part of Pakistan’s World Cup-winning cricket team. He faced off in seven games, finishing with 43 runs and nine wickets in six innings. Shadab scored 46 runs in two One-Day Internationals (ODIs) against South Africa in April 2021, although he did not take any wickets. Then, he faced England in three One-Day Internationals, where he recorded three wickets and 51 runs. In the first two games of his next series, played in June 2022, Shadab got three wickets and scored 28 runs, but in the third game he scored 86 runs and took four wickets for 62 runs. In the previous series Shadab played in August, he only managed to take one wicket and score 48 runs against the Netherlands.

On April 30, 2017, Shadab debuted in a Test match against the West Indies. Even though it was his debut Test, Shadab was able to score 40 runs and take one wicket. His next game was in May of 2018 against Ireland, exactly one year later. This time around, Shadab wowed the coaches and selectors by grabbing four wickets and hitting 59 runs, including a half-century. Shadab was forced to participate in two Test matches against England after an impressive showing. Shadab hit a half-century in both games while playing against a formidable opposition away from home and also picked up three wickets. In January of 2019, he would face South Africa in his next encounter. In the first innings, Shadab only got one wicket and scored five runs, but in the second, he dismissed three batsmen and scored 47 runs without being defeated. In August of 2020, after more than a year had passed, Shadab participated in his last Test match. At Old Trafford, against England, Shadab scored sixty runs and got two wickets.

On March 26, 2017, against West Indies in a Twenty20 international, Shadab Khan made his debut for the senior team. He took three wickets in four overs while allowing just seven runs, which caught everyone by surprise

Later, on April 7, 2017, Shadab debuted in an ODI against the West Indies, allowing 52 runs in his nine overs while taking two wickets.

On April 30, 2017, on the same tour of the West Indies, Shadab Khan was handed his first test cap. The Pakistani team lost despite his one wicket and 16 run performance in the first innings. Shadab has never attempted another test.

Know all about cricket news and updates at CBTF news.

Get the fastest cricket news update at https://cbtfspeednews.com/.

Know all about cricket betting and updates at CBTF betting.

Get the updated expert betting tips at https://cricketbettingtipsfree.com/

Checkout our videos to get the latest updates about cricket and betting tips, and casino

tips to win big with expert opinions at https://www.cbtfmytube.com/.